Last fall, University of Michigan President Mark Schlissel committed the university to establish an effective path toward carbon neutrality for the university community and beyond.

The President’s Commission on Carbon Neutrality was appointed on Feb. 4 to develop recommendations for how to achieve carbon neutrality for U-M, as well as develop scalable and transferable strategies that can be used by other institutions and larger communities to achieve the same goal.

Presented below, in a question-and-answer format, is:

Q. What is the purpose of the President’s Commission on Carbon Neutrality?

A. The U-M President’s Commission on Carbon Neutrality brings together the U-M community and regional partners to explore how U-M can reduce its carbon emissions to levels that are environmentally sustainable. Informed by panels of advisers, the commission will develop recommendations to achieve this goal in a fiscally responsible manner and in the context of U-M’s mission of education, research, service and patient care.

The scope of the charge to the advisory committee to the president spans all three U-M campuses – Ann Arbor, Flint and Dearborn – and includes, but is not limited to: carbon emissions and sequestration; energy sourcing; technology development and policy change; facilities, operations and mobility; and behavioral change. You can read more here.

Q.What is the makeup of the President’s Commission on Carbon Neutrality?

A. The 17-member commission includes U-M faculty members with expertise, key staff personnel, students, community members and representatives of the state’s leading utilities. The commission is led by two co-chairs: Stephen Forrest is a professor of electrical engineering and computer science, physics, and material sciences and engineering and former U-M vice president for research. Jennifer Havercamp is the Graham Family Director of the Graham Sustainability Institute at U-M and professor from practice at the U-M Law School. You can read about all commission members here.

Q. Why are energy companies represented on the commission?

It is absolutely critical for the energy industry to be a part of our pursuit of societal solutions. The companies are the top energy providers for our region and state. They have each made commitments to convert more of their current generating capacity from fossil fuels to renewables and are engaged in strategy development that will be useful to our own efforts.

Q. What is the Commission on Carbon Neutrality doing to engage the community?

A. The commission has been busy engaging with members of the campus community to develop the plan to achieve carbon neutrality.

The commission sponsored two earlier public town hall meetings in addition to the special session with President Schlissel on April 9. Others will be scheduled in the months ahead and the commission will issue interim reports and provide updates via its website.

The commission co-chairs have met with student activists to hear their views. The president has met with students during his regular office hours who are part of the Climate Action Movement.

The commission also posts meeting notes on its website here.

Q. What is the timeline for completing the commission’s work?
This will be a long-term effort and the commission already has begun its work.

Q. What has the university already done to reduce carbon emissions?

A. The university has achieved a significant carbon reduction while growing the campus by 20 percent in the past two decades. In fact, U-M is two to three years ahead of meeting its greenhouse gas reduction goal.

U-M has reduced emissions more than 7 percent from our 2006 baseline. That’s nearly 50,000 metric tons of carbon dioxide, which is equivalent to removing 10,500 cars from the road.

Two of the biggest projects that will contribute to achieving the goal are underway: the expansion of the co-generation Central Campus Power Plant and a renewable energy purchase agreement with DTE Energy.

These projects are the direct result of 2015 recommendations made by the faculty-staff-student Greenhouse Gas Reduction Committee. You can read the full committee report here.

Q. What steps has the university taken to get more of its electricity from renewable sources like solar panels and wind turbines?

A. On April 9, the university announced that it is on track to reduce greenhouse gas emissions significantly with an agreement to buy renewable energy through DTE Energy. The agreement will result in about half of the purchased electricity for the Ann Arbor campus coming from Michigan-sourced renewable resources.

U-M has committed to purchase approximately 200,000 megawatt hours of renewable energy annually through DTE Energy beginning in 2021. You can read more about those plans here.

Q. How does U-M compare with other institutions such as Ohio State University in its reduction of greenhouse gas?

A. Comparing institutions is fraught, and doesn’t help any of us further our collective goal of reducing carbon emissions.

Each school is starting from a different place with many factors, including: square footage, emission scopes, geographic location and the mission of the institution. Health care facilities, for instance, require much more energy than other buildings. So if you have a large health system to include in your greenhouse gas reduction goals – as U-M does – you have a different measure than one that doesn’t.

What’s important is that each school is taking action to reduce emissions that works on those individual campuses.

U-M has great respect for OSU and all they are doing, but to suggest they have been acting on emissions reduction more effectively than U-M is not true. On a per-square-foot basis, U-M has one of the lowest carbon dioxide emissions levels among our higher-ed peers. For example: U-M’s metric tons of carbon dioxide per square foot is .017 vs OSU’s .025.

Q. Why do we need a new natural-gas turbine in the Central Power Plant? Why not spend that $80 million on renewable energy sources of electricity like solar and wind?

A. U-M needs reliable heat and electricity to support our public mission. This includes conducting life-saving research, providing heat for thousands of students who live on campus and powering a 24-7 medical center that provides world-class care. In the near term, there is no viable alternative to fossil fuels that allows U-M to make the steam that it depends on to heat the campus.

The new gas-powered turbine was recommended by an earlier advisory panel. This turbine allows U-M to make electricity at the same time it produces steam, doubling the efficiency of energy use. Without the new turbine, the university would need to purchase more of its electricity from DTE Energy. Currently, about 60 percent of DTE’s electricity is generated by burning coal, which releases more carbon dioxide and also causes air pollution which affects human health.

The turbine already has been purchased and construction site preparations are underway.

Therefore, U-M will move ahead with the installation of the new co-generation turbine.

U-M also recognizes recent research that shows that the benefit of using natural gas in place of coal might be diminished if there are leaks during gas extraction and transmission. The president has asked the commission to investigate this with regard to U-M’s natural-gas supply chain. U-M will use these findings to properly account for the carbon dioxide release from our power plant, but more importantly to engage with its natural gas provider to mitigate the leakage, something that is in everyone’s interest.

Q. Will the university consider divesting from any fossil fuel companies that are part of the university’s endowment portfolio of investments?

A. The university has long taken the position to shield the endowment from special-interest pressures and to base our investment decisions solely on financial factors. The university will not divest from fossil-fuel investments.

Q. Why not commit now to a deadline in the future for carbon neutrality?
A. The university is committed to achieving this goal, but it needs to know how first. U-M needs to know how it can achieve carbon neutrality as it also provides care for nearly 2.5 million patient visits, runs a $1.55 billion research enterprise and keeps the lights and heat on for thousands of students who live on campus.

If there were a simple solution that allowed the university to be carbon neutral without compromising tuition affordability and its research, education and patient care missions, and would have a real impact regionally, it would do it.

The university wants to take the time to gain the input of students and get the expertise of its faculty and staff and external partners before it makes a decision on carbon neutrality. It’s really critical to engage the U-M community in the way they have repeatedly asked for on major topics.

Q. How can the community trust there will be accountability to move forward with the recommended plan?

A. The president has publicly committed the university to carbon neutrality and asked our experts for an actionable plan to get us there.

It is worth noting that when President Schlissel came to U-M five years ago, he adopted the previous goal and committed to accelerating progress toward the goal, and the university is now on target to achieve it ahead of schedule. Now U-M is setting new targets that U-M – as a community – all will hold accountability for reaching. Accountability lies with all of us.

Q. Why were some student protesters who staged a sit-in in the university’s administration building in March arrested?

A. It is simply not safe to leave students in an unoccupied building beyond the time when the building closes. University officials communicated with the protesters in the president’s office repeatedly throughout the day that they must leave the building when it closed at 5 p.m.

Following several discussions with the protesters, the university extended the departure deadline to 8 p.m. Most protesters did leave at that point, while some chose to stay and were arrested. Subsequent demonstrations have occurred during regular working hours and have not resulted in any arrests.

The work of the commission is in addition to U-M’s longstanding climate action efforts, which include: 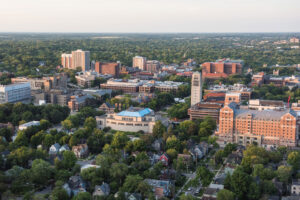